While one might dispute the actual number of people who would qualify for star status, no one would dispute the premise that Sean Connery is one of them. Moreover, he is not merely a star – he is a super-star.

He began his theatrical career as an extra in the chorus, playing bit parts, and modeling. From those modest beginnings, he has become an international film icon. Many believe that his talent and appeal continue to improve with time. 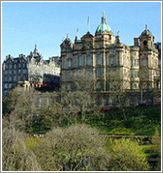 His humble beginnings, growing up in a working class neighborhood in Edinburgh, gave no indication of the achievements that were destined to come. Sean was born into a working class family in August of 1930. The oldest of two boys, he spent much of his youth working at menial jobs, just to get by. He left school at an early age and went to work fulltime.

At sixteen, he enlisted in the Royal Navy. Like many young men in the Navy, he opted for a tattoo. However, unlike many tattoos, his were not frivolous – his tattoos reflect two of his lifelong commitments: his family and Scotland. After six decades, his tattoos still reflect those two ideas: One tattoo is a tribute to his parents and reads “Mum and Dad,” and the other is self explanatory, “Scotland Forever.”

After three years of Naval service, a long bout with a stomach ulcer shortened his “naval career”. He returned to Edinburgh and seemed to settle into a life of hard work: bricklayer, lifeguard, and coffin polisher. Sean spent much of his free time bodybuilding, a pastime that eventually started his acting career. His hobby of bodybuilding culminated in a bid for the 1950 Mr. Universe title where he placed third.

From his early acting days until his first superstar role, Sean’s stardom was certainly not an over-night success story. From his first work in modeling, bit theatrical parts, and chorus appearances, it was almost eight years before he was cast opposite Lana Turner in Another Time, Another Place (1958). It would be another four years before he first uttered those unforgettable words, “Bond, James Bond.” 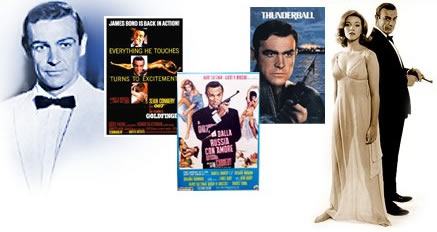 He then broadened his career with an Agatha Christie whodunit, Murder on the Orient Express (1974), John Huston’s adaptation of Rudyard Kipling’s adventure, The Man Who Would Be King (1975), the medieval romance, Robin and Marian (1976), and Peter Hyams’ sci-fi film, Outland (1981). He resurfaced as a much wiser and more mature Bond in the 1983 adventure, Never Say Never Again. For a complete list of his films, see the filmography page.

The 90’s brought such great films as The Hunt for Red October (1990, as a Russian sub commander); and 1993’s Rising Sun (as an expert in all things Japanese); Dragonheart (1996); and the successful contemporary action dramas Just Cause (1995); and The Rock (1996). In 1999, Connery starred in and produced (Fountainbridge Films) Entrapment, a love story-thriller, costarring Catherine Zeta-Jones. The year 2000 brought what many have said to be one of his best films, Finding Forrester. Sean’s latest movie “The League of Extraordinary Gentlemen” was released in 2003.

Many critics and fans alike have said that the quality of his acting has only improved with age. Certainly his personal appeal has. In 1989, at almost 60 years of age he was voted People Magazine’s “Sexiest Man Alive.” When advised of the award, Sean seemed to be unaffected as he replied, “Well there aren’t many sexy dead men, are there.”

Decorate your computer desktop with a film themed wallpaper featuring selected images from Bond to Forrester.